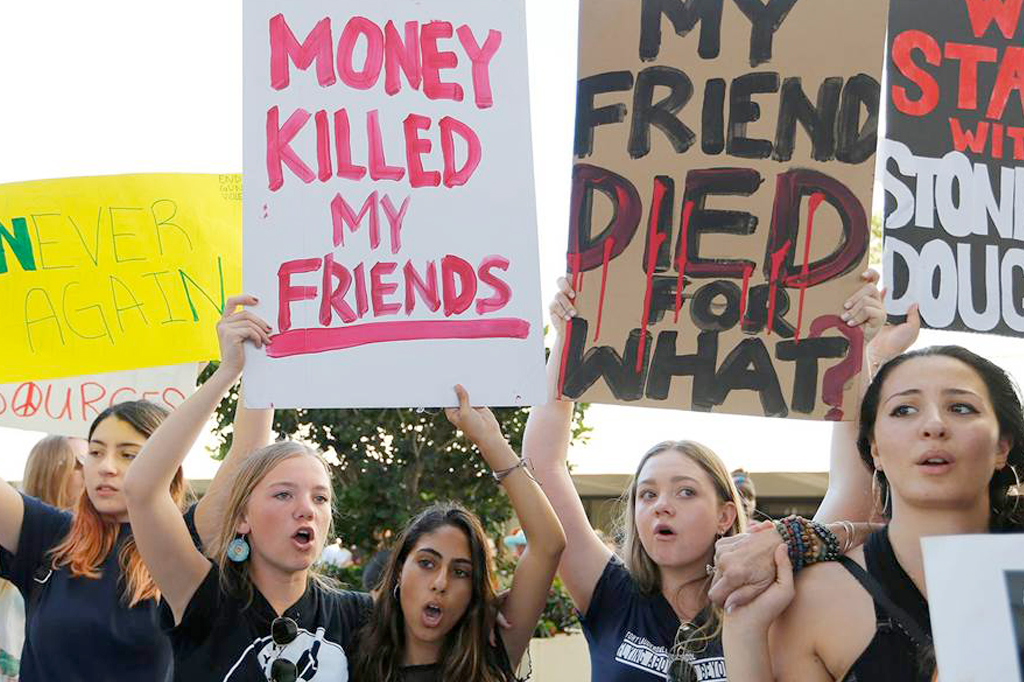 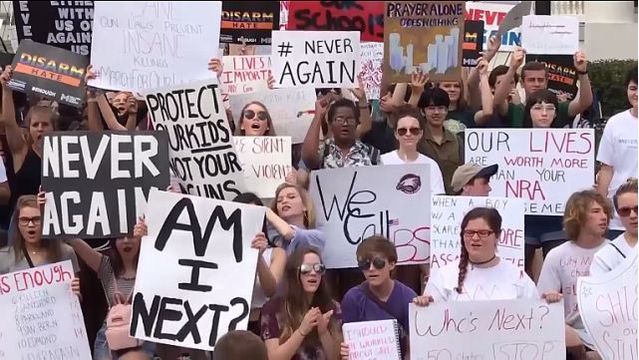 Since the mass shooting on February 14th at the Mary Stoneman Douglas High School in Parkland, Florida, the school’s brave students have ignited an unprecedented movement and have transformed the dialogue of gun control in our country. Through impassioned media appearances, social media campaigns, protests and speeches at rallies like Emma Gonzalez’s viral “We call BS” speech that we featured on Girl Tribe Mag’s Instagram @girltribemag and senior Delaney Tarr’s media appearances, both featured in this issue’s “It List,” the students have tirelessly fought back against the NRA and the politicians who cater to the organization.

So far, the students have had a significant impact on public perceptions of the NRA and have inspired some businesses to make policy changes around guns. On February 28th, Dick’s Sporting Goods, one of the nation’s largest sports retailers, announced that they will no longer sell assault-style rifles and high-capacity magazines, and will not sell guns to anyone under 21 years old in their stores. This is a major policy change coming from a prominent gun supply store, which Dick’s chief executive, Edward Stack said was a direct response to the Parkland, Florida mass shooting. “When we saw what happened in Parkland, we were so disturbed and upset,” Mr. Stack said in an interview with The New York Times. “We love these kids and their rallying cry, ‘enough is enough.’ It got to us.” Dick’s also said that they hoped their policy change would be followed by political action, passing “Common sense gun reform” including raising the legal age to buy guns, banning assault style weapons and bump stocks, and expanding background checks to include the customer’s mental health and interactions with law enforcement.

A few hours after Dick’s announcement, Walmart, the country’s biggest gun seller, also announced that they will no longer sell guns or ammunition to anyone under 21 years old. Walmart had stopped selling assault style weapons in 2015, but will now expand the ban to even toys and air guns that resemble assault style rifles. Walmart confirmed this new policy change was directly related to events in Florida saying, “In light of recent events, we’ve taken an opportunity to review our policy on firearm sales.”

The student-led movement has also led numerous businesses to end special relationships with the NRA. As of press time, over twenty companies have ended their discount partnerships with the gun organization including car rental companies Avis, Budget, Hertz, TruCar, Enterprise, Alamo, and National, Delta and United airlines, First National Bank of Omaha which stated due to customer feedback, they are ending their relationship of specially branded NRA/Visa cards. Other companies breaking partnerships include software company Symantec, SimpliSafe, insurers MetLife and Chubb, and moving companies Allied and North American Van lines. FedEx announced that they would not be changing their NRA discount program, but released a statement saying, “We strongly support the constitutional right of U.S. citizens to own firearms subject to appropriate background checks,” but, “FedEx opposes assault rifles being in the hands of civilians.”

On the political front, the students are facing a tougher battle. On February 21st President Trump, Vice President Mike Pence and Education Secretary Betsy DeVos and forty-one students, teachers and family members of victims of mass shootings attended a listening session at the White House to discuss gun reform. President Trump acknowledged the need for gun control reform, and said that he would make school safety a priority of his administration. 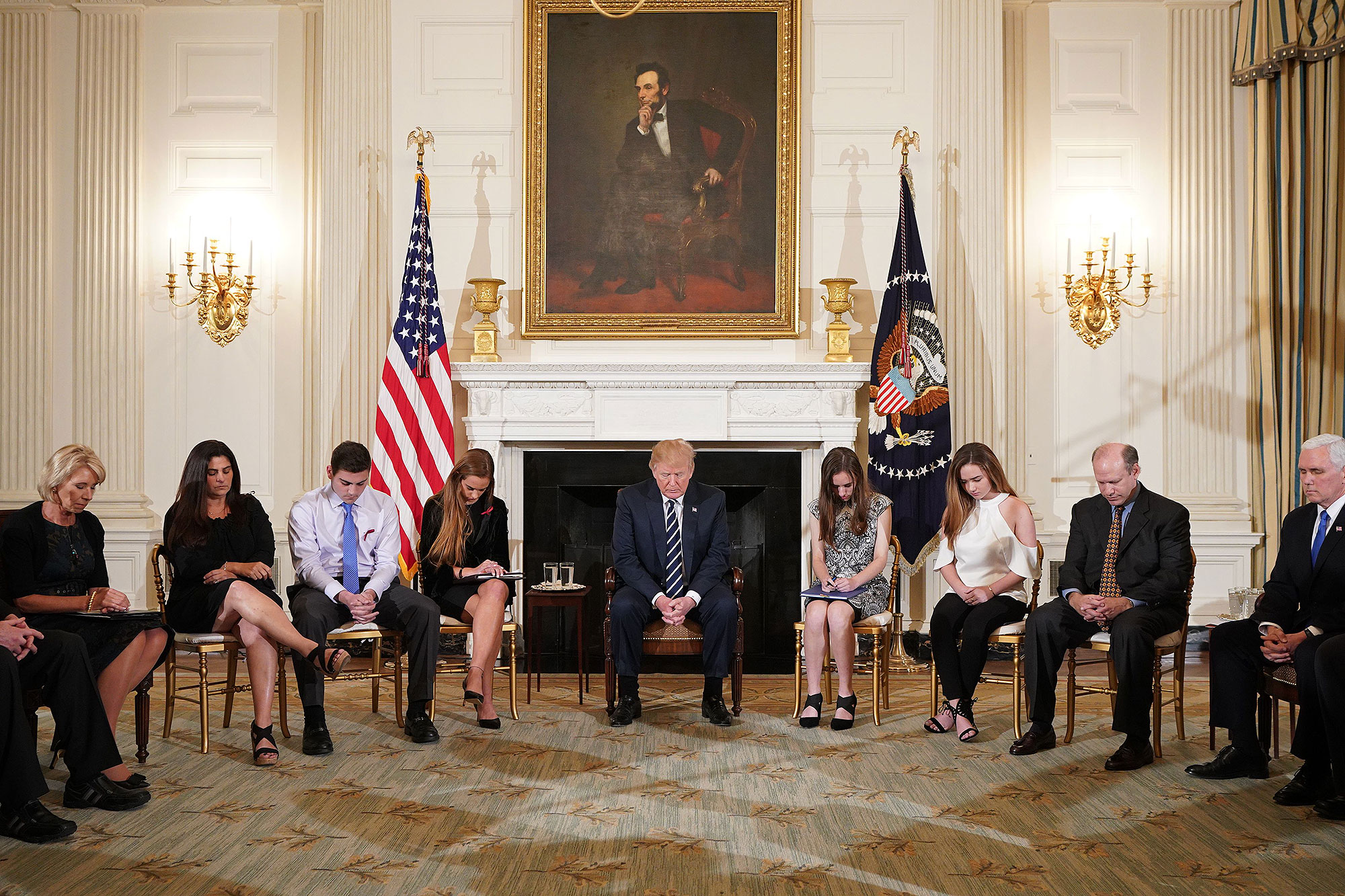 First Lady Melania Trump made a rare public statement on February 26th supporting the student-led demonstrations and protests calling for gun restrictions. “I have been heartened to see children across this country using their voices to speak out and try to create change,” she said. “They’re our future and they deserve a voice.” 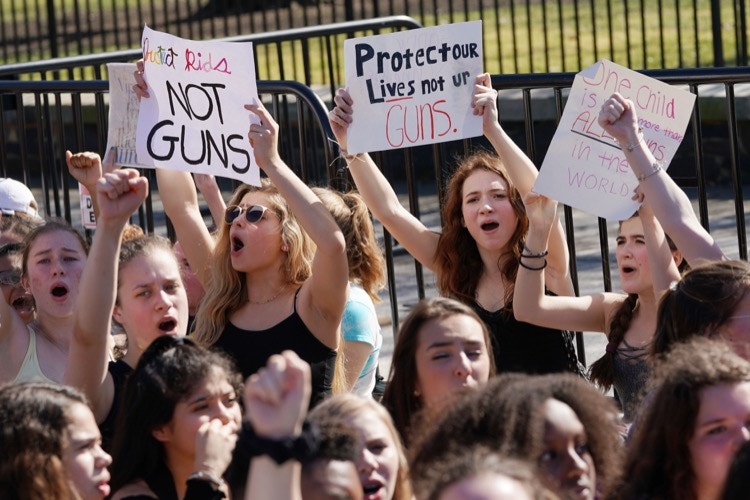 While there has been pushback from Republican Congressmen, including many representatives from Florida, on March 1st Senator Marco Rubio announced a Stop School Violence Act which will help strengthen school security, training on identifying threats and create task forces. Rubio is also proposing a new law to create Gun Violence Restraining Orders which will give law enforcement and close family members the ability obtain a court order to prevent any individual who poses a threat to purchase a gun, and may remove guns from individuals deemed unstable. Additionally, Rubio suggested changes to reporting systems from school to law enforcement, strengthening background checks, monitoring people trying to cheat the background check system, raising the legal age to purchase a gun, and banning high capacity magazines. These proposals are not uniformly supported in Congress and there will likely be a lot of debates about these issues in the coming weeks. You can read Rubio’s full Senate plan to prevent gun violence here:

Despite the uphill battle, students from around the country are not giving up their fight. On March 24th, the students from Marjory Stoneman Douglas High School along with non profit Everytown for Gun Safety have organized a march on Washington, called the “March for Our Lives.”

Amal and George Clooney were the first to announce a $500,000 donation to the “March for Our Lives.” “Amal and I are so inspired by the courage and eloquence of these young men and women from Stoneman Douglas High School,” George Clooney said in a statement. “Our family will be there on March 24 to stand side by side with this incredible generation of young people from all over the country, and in the name of our children Ella and Alexander, we’re donating 500,000 dollars to help pay for this groundbreaking event. Our children’s lives depend on it.”

Hollywood mogul Jeffrey Katzenberg and his wife Marilyn soon followed the Clooneys and said, “Marilyn and I are proud to stand with the brave young leaders from Parkland, Florida, who have taken their pain and grief and turned it into action. We will join Amal and George Clooney on March 24 to stand alongside these remarkable young people. We are also donating $500,000 to March for Our Lives to support this historic event.”

Other notable supporters who matched the Clooney’s donation are Steven Spielberg and wife Kate Capshaw, and Oprah Winfrey who said, “These inspiring young people remind me of the Freedom Riders of the 60s who also said we’ve had ENOUGH and our voices will be heard.”

If You Want to Get Involved

In addition to the March For Our Lives in Washington on March 24th, there will also be local sister marches around the country. If you are interesting in joining a local march, or would like to make a donation, you can do so here.

Another nationwide protest is scheduled for March 14th as the Women’s March EMPOWER branch, which handles and promotes youth-led advocacy, will launch a #NationalSchoolWalkout. The group has called for “students, teachers, school administrators, parents and allies” to participate by leaving classrooms for 17 minutes at 10 a.m. “to protest Congress’ inaction to do more than tweet thoughts and prayers in response to the gun violence plaguing our schools and neighborhoods.” It’s time to say #ENOUGH. 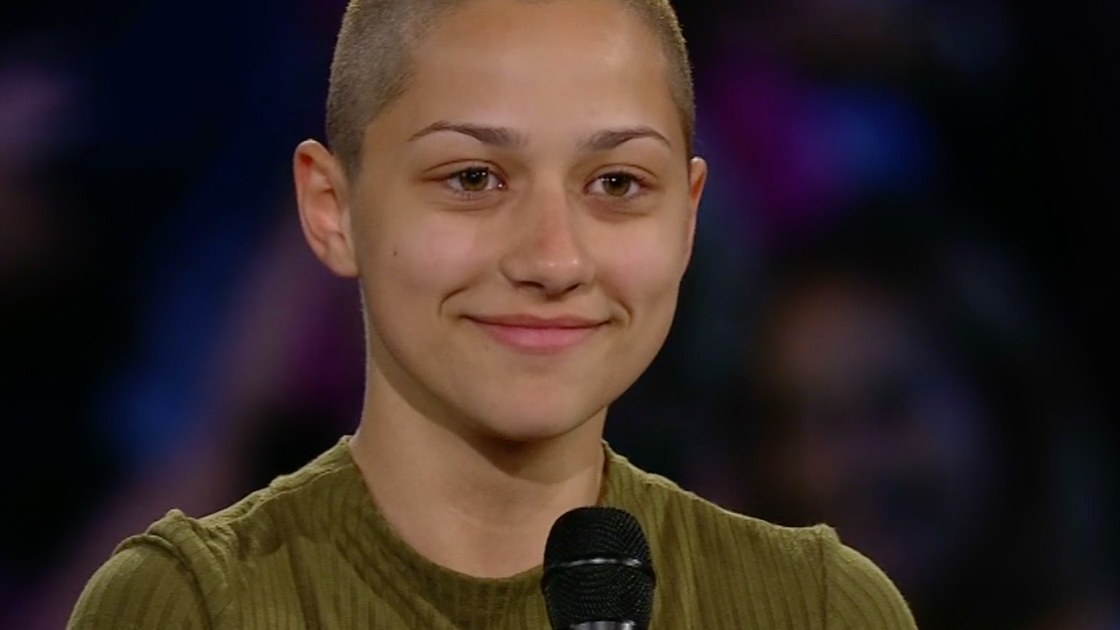 Emma Gonzalez, The Face of Our Generation, A Leader of The March for Our Lives Movement

Emma Gonzalez has quickly become one of Generation Z’s most recognizable faces. Her passion, her obstinate personality, and her “look” has attracted the attention of all Americans. In her now “famous” speech in front of Broward County Courthouse she unwittingly created a new movement that encourages stricter gun laws. Her conscious usage of the phrase #WeCallBS deliberately caught fire during her speech. Emma Gonzalez is a Cuban, bisexual, young girl who took a stand against the National Rifle Association, President Donald Trump, and anyone who would stand in her way. Thanks to twitter, facebook, and the mass media, many celebrities took notice and are tweeting/posting pictures to spread awareness, allowing kids to know that they are supporting the movement. On March 24th, The March for Our Lives Movement will take place across America to demand the end of mass shootings. To sign the petition, go to marchforourlives.com. Emma Gonzalez says on twitter,

“Those who face gun violence on a level we have only just glimpsed from our gated communities have never had their voices heard in their entire lives the way that we have in these few weeks alone. Since we all share in feeling this pain and know all too well how it feels to have to grow up at the snap of a finger, we were able to cover a lot of ground in communicating our experiences. People of color in inner-cities and everywhere have been dealing with this for a despicably long time, and the media cycles just don’t cover the violence the way they did here. The platform us Parkland Students have established is to be shared with every person, black, white, gay or straight, religious or not, hand in hand, side by side, We Will Make This Change Together.”

Youth activism in its prime; she doesn’t let anyone censor or stifle what she has to say. #StudentsStandUp #Emma4Change. 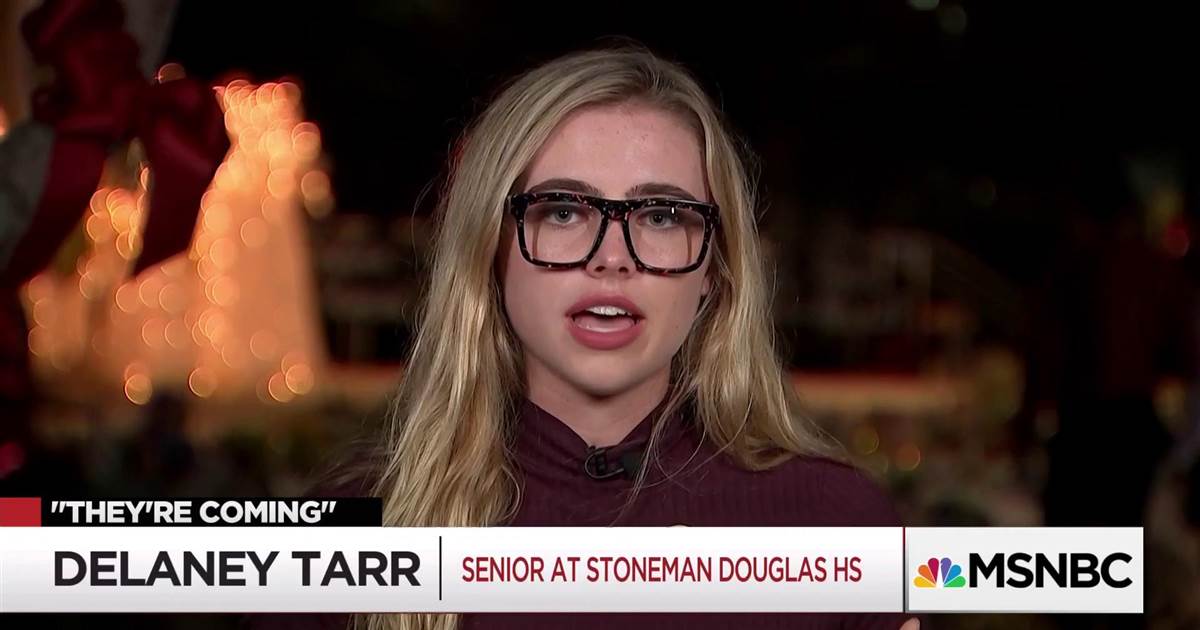 Delaney Tarr is another senior from Marjory Stoneman Douglas High school who has become an extraordinary activist and spokesperson for gun reform. An aspiring journalist, Tarr’s experience as anchor of her high school’s news program has clearly contributed to her articulate delivery and natural poise which has made her a prominent voice and media presence.

Just days after the mass shooting, Tarr and classmate Carley Novell appeared on the Comedy Central show Jordan Klepper’s The Opposition to explain the need for gun reform and their plans for the upcoming March for Our Lives in Washington on March 24th.
http://www.cc.com/video-clips/uoen01/the-opposition-with-jordan-klepper-carly-novell—delaney-tarr—reforming-gun-laws-with–neveragain

A week after the shooting, Tarr served as spokesperson to the assembled media at the Florida State Capital in Tallahassee to demand gun reform and to warn the government representatives that if they did not listen to their constituents, they would be voted out of office. (You can watch her entire speech in this issue’s It List.)
Tarr has become a national figure and has been featured in numerous media outlets, has appeared on Fox News Sundayand MSNBC, and wrote an op-ed for Teen Vogue, which you can read here (https://www.teenvogue.com/story/i-survived-the-parkland-shooting-delaney-tarr). 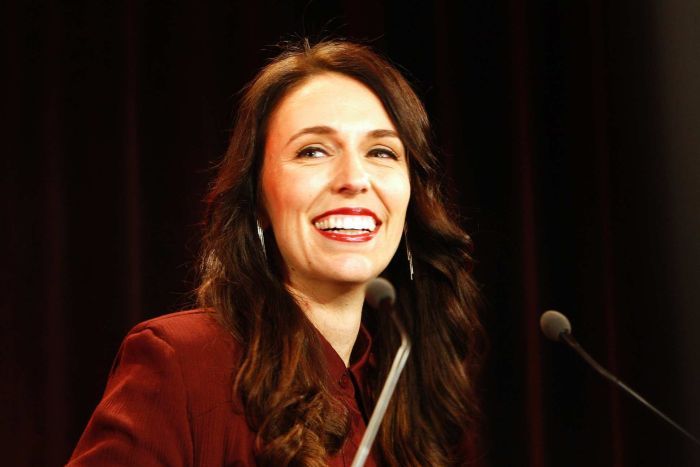 At only 37 years old, Jacinda Ardern is taking the world by storm. Last year, she took on the the role of youngest woman Prime Minister in New Zealand. Ardern’s political awakening began in high school when she started to notice the poverty all around her. She became a member of the Labour party, or liberal party in New Zealand, at the age of 17. Because of this, Arden was constantly ridiculed by her classmates, but she continued with what she believed in. She continued to pursue her political career and became the youngest member of the New Zealand parliament in 2008. Soon after, Andrew Little, Labour party head, resigned and left Ardern to win the election with a party with a mid-20 percent approval rating, but she persisted and eventually won.

Arden has big ideas for the country and says that even though New Zealand is small, it still has a voice. She addresses issues like climate change, New Zealand’s nuclear free policy, and so much more. Frequently, Ardern speaks at colleges and conventions for women in leadership. She relates to women all over the world, being the daughter of a police officer and cafeteria worker, she’s just a small town girl with big dreams. Ardern believes all women should go beyond their comfort zone and try something new because who knows, you may even become Prime Minister! Jacinda Ardern’s journey paves the way for millions of young women in New Zealand and across the globe.