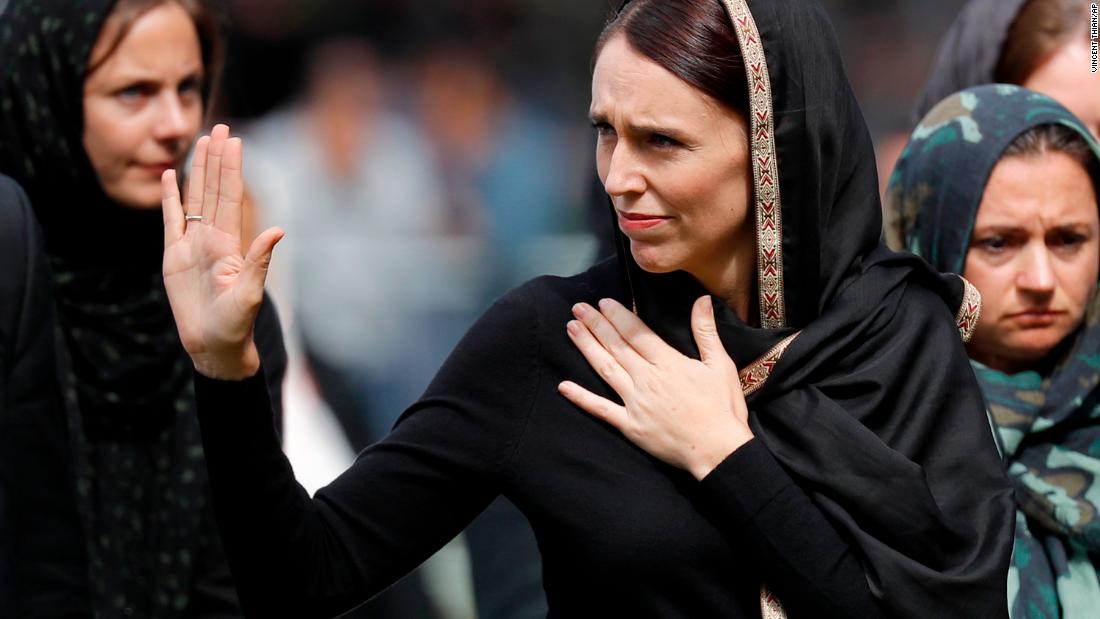 New Zealand Prime Minister Jacinda Ardern waves as she leaves Friday prayers at Hagley Park in Christchurch, New Zealand, Friday, March 22, 2019. Thousands of people gathered in a Christchurch city park near the Al Noor mosque where a gunman on Friday, March 15 killed some of the 50 worshippers in a white supremacist attack on two mosques. (AP Photo/Vincent Thian)

New Zealand Prime Minister Jacinda Ardern, the youngest prime minister ever, received a standing ovation as she arrived to address thousands of people who gathered at Hagley Park for a national memorial service in honor of the 50 people killed by a gunman at two mosques in central Christchurch. Ardern had exhibited extraordinary leadership in response to the country’s worst terrorist attack ever. She had announced that there would be changes to New Zealand gun laws less than 24 hours after the shooting, and then actually followed through on those promises by banning military-style semi-automatic guns and assault rifles and instituted a buyback program. The rest of the world watched in awe as this young woman led a nation and the worldwide community in mourning, and also showed the world that responsible modifications to gun laws in light of mass shootings was possible and desirable.

Ardern’s entire memorial speech is below, as reprinted in the Guardian:

(I acknowledge amongst us today our distinguished leaders, speakers and those who bear authority.)

(My greetings to the whole of Ngāi Tahu.)

(The tides of remembrance flow over Christchurch today.)

We gather here, 14 days on from our darkest of hours. In the days that have followed the terrorist attack on the 15th of March, we have often found ourselves without words.

What words adequately express the pain and suffering of 50 men, women and children lost, and so many injured? What words capture the anguish of our Muslim community being the target of hatred and violence? What words express the grief of a city that has already known so much pain?

I thought there were none. And then I came here and was met with this simple greeting. As-salaam Alaikum. Peace be upon you.

They were simple words, repeated by community leaders who witnessed the loss of their friends and loved ones. Simple words, whispered by the injured from their hospital beds. Simple words, spoken by the bereaved and everyone I met who has been affected by this attack.

As-salaam Alaikum. Peace be upon you.

They were words spoken by a community who, in the face of hate and violence, had every right to express anger but instead opened their doors for all of us to grieve with them. And so we say to those who have lost the most, we may not have always had the words.

These stories, they now form part of our collective memories. They will remain with us forever. They are us.

But with that memory comes a responsibility. A responsibility to be the place that we wish to be. A place that is diverse, that is welcoming, that is kind and compassionate. Those values represent the very best of us.

From the thousands at vigils to the 95 year old man who took four buses to attend a rally because he couldn’t sleep from the sadness of seeing the hurt and suffering of others. Our challenge now is to make the very best of us, a daily reality.

Because we are not immune to the viruses of hate, of fear, of other. We never have been. But we can be the nation that discovers the cure.

And so to each of us as we go from here, we have work to do, but do not leave the job of combatting hate to the government alone. We each hold the power, in our words and in our actions, in our daily acts of kindness. Let that be the legacy of the 15th of March. To be the nation we believe ourselves to be.

To the global community who have joined us today, who reached out to embrace New Zealand, and our Muslim community, to all of those who have gathered here today, we say thank you.

And we also ask that the condemnation of violence and terrorism turns now to a collective response. The world has been stuck in a vicious cycle of extremism breeding extremism and it must end.

We cannot confront these issues alone, none of us can. But the answer to them lies in a simple concept that is not bound by domestic borders, that isn’t based on ethnicity, power base or even forms of governance. The answer lies in our humanity.

We will remember the tears of our nation, and the new resolve we have formed.

And we remember, that ours is a home that does not and cannot claim perfection. But we can strive to be true to the words embedded in our national anthem

Men of every creed and race,

Gather here before Thy face,

Asking Thee to bless this place

And corruption, guard our state

Make our country good and great

February 26th, 2019: 14 candidates all vye for the one opportunity to be the mayor of Chicago. None of the candidates gain more than half of the vote so the two candidates with the most votes, Lori Lightfoot and Toni Preckwinkle go into a runoff.

April 2nd, 2019: Lori Lightfoot wins 73% of the vote, defeating Toni Preckwinkle and securing a new title: Mayor of the City of Chicago.

Lori Lightfoot was born on August 4th, 1962 in Massillon, Ohio as the youngest of four children to a working class family. She attended the University of Michigan where she received her BA in political science in 1984. Before enrolling in law school at the University of Chicago, Lightfoot worked with Maryland Congresswoman Barbara Mikulski Ohio Congressman Ralph Regula; Lightfoot earned her JD in 1989.

Lightfoot worked as a federal prosecutor in Illinois, specifically as the Assistant United States Attorney for Northern Illinois. She was involved with the City of Chicago in many capacities prior to running for Mayor, including the Chicago Police Department Office of Professional Standards, Chicago Office of Emergency Management and Communications, Department of Procurement Services, Chicago Police Board and the Police Accountability Task Force. Lightfoot has also served on the Illinois chapter boards of NARAL and the ACLU; she has also worked in the private sector as external counsel for the Bank of America.

Chicago’s two major newspapers, the Chicago Tribune and Chicago Sun-Times, endorsed Lightfoot along with more than a dozen labor unions.

According to her campaign materials, one of Lightfoot’s main goals for her time as Mayor is to reduce the amount of violence in the city and increase the quality of neighborhood schools and the school system in general along with diminishing the burden taxes and fees place on middle and lower income families.

Lightfoot lives in Chicago with her wife Amy Eshleman, a former employee of the Chicago Public Library, and their 11 year old daughter Vivian.