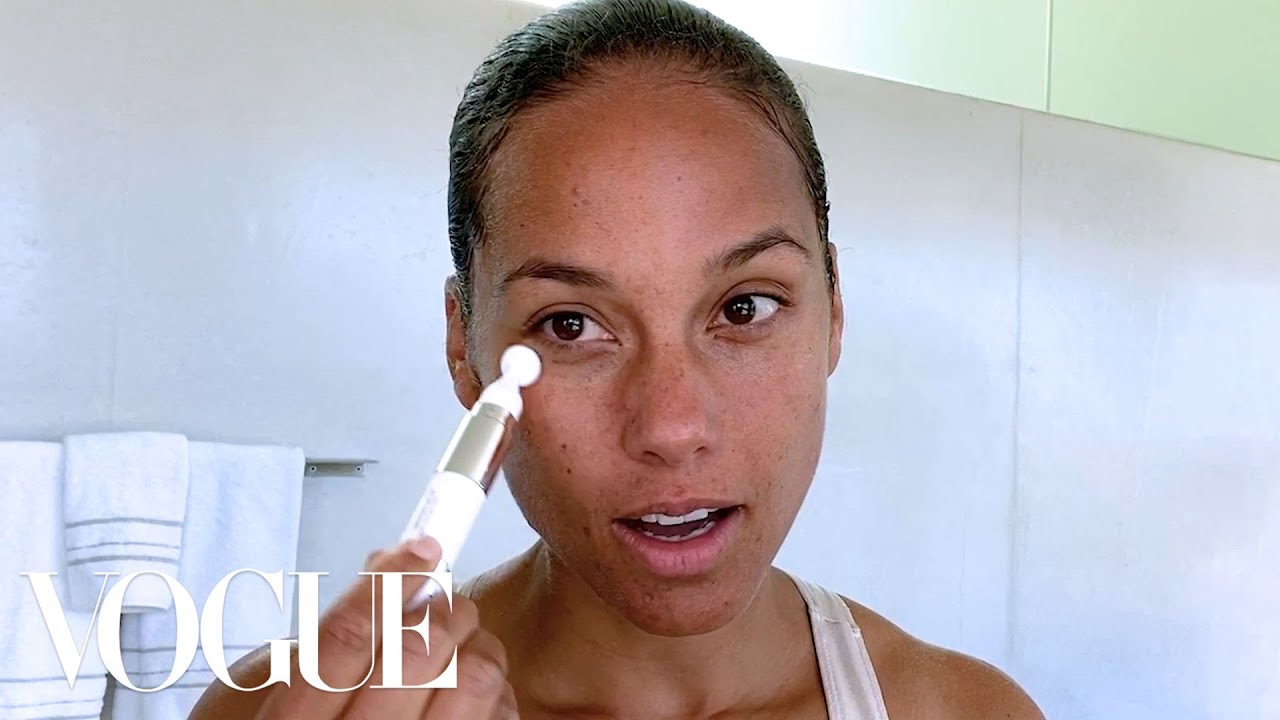 Alicia Keys Figures Out Her Skin

Alicia Augello Cook (39), known professionally as Alicia Keys, is an American singer-songwriter. The Grammy award-winning artist has been giving tips to followers on beauty, wellness, and self-care. The well-known singer/songwriter released a beauty-meets-self-care line called Keys Soulcare, which debuted on December 3, 2020. All of the beauty rituals Ms. Keys are designed to make women feel beautiful and confident.

Keys shared that she has very oily skin and being under the bright lights when performing and constant photoshoots, she felt unconfident and needed a fix. At the beginning of Alicia’s career, she was prone to breakouts and oily skin. Keys says “I was under the camera and under hot lights, and that definitely did not help.” Alicia didn’t know much about skincare and Keys’ Mother wasn’t too knowledgeable on beauty either. Alicia had to try a lot of different things and many different skincare products until she found one that fit and was perfect for her. Alicia is launching this line because she feels that it is so important to care about your skin and that these doable rituals are easy to bring into busy lives. She finds that these rituals and routines that she does every morning give her a center. Keys also participates in daily meditation which she explains is very important when starting off her day.

The Keys Soulcare collection includes face cream, a face roller, and a candle that are all cruelty-free. This collection is available at Ulta and online. Though the collection is small, the cruelty-free candle, face cream, and a face roller are all worth it. The candle is a smoky sage and sweet oat milk combo, and it comes adorned with the affirmation “I shine at full wattage.” The face cream, which was developed in partnership with Dr. Renée Snyder, a board-certified dermatologist and one of the co-founders of beauty brand “W3LL PEOPLE,” is one of the most beloved products of the collection. The formula contains bakuchiol, malachite, ceramides, and hyaluronic acid, to hydrate all skin types. The obsidian face roller causes a  cooling sensation on your face, while helping to depuff the skin. Together, the face cream and roller combo can be used each morning and night. More products are expected to launch early in 2021. 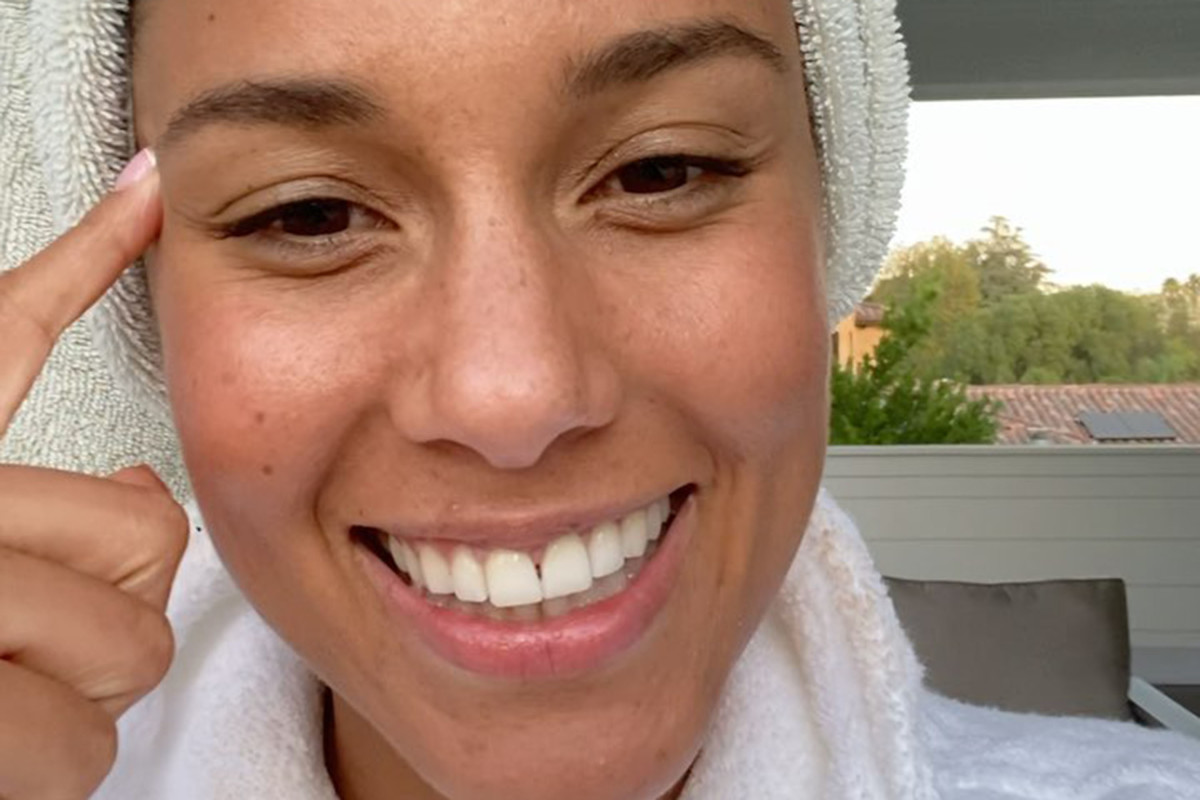 Alicia loves the “Drunk Elephant” skincare collections and she says she loves the  Chanel Le Volume waterproof mascara in brown. “The color is called 27 Mirage. In general, I like a lot of Chanel makeup products.”As for Alicia’s bath routines, she uses the amazing bath boxes from Mama Medicine, which are also going to collaborate with Keys Soulcare. These highly recommended bath boxes are filled with rose petals, crystals, and certain oils and incense. When it comes to Alicia’s hair, she uses many different products. One of the many products she uses is by a new brand founded by Gabrielle Union and Larry Sims called Flawless. Alicia recommends these products because the items are simple and effective. Alicia’s hair is very curly, and if she is wearing it curly, the more hydrated the better, this is why she also uses products from Ouidad. After applying her haircare products, Keys usually lets her hair air dry or blow-dry. 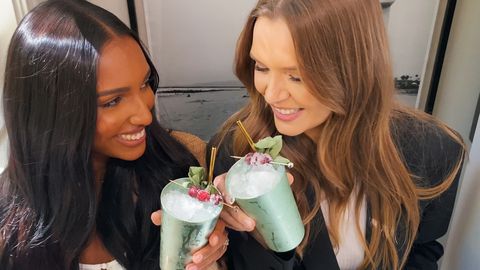 Given the unforeseen and gloomy circumstances of 2020, many people have been anticipating the holiday season as a silver lining. Supermodels and best friends, Jasmine Tookes and Josephine Skriver,  figured out the best way to go about holiday hangouts and ugly-sweater themed reunions this year. Both models emphasized that the “vibe” of the holiday get-together could be salvaged, despite the pandemic and its effects, with the help of fun sweaters, drinks, and table decorations.

Tookes suggests a nicely prepared set up of drinks for guests, saying, “It creates such a nice vibe and makes your guests feel very welcome.” Being fashion models, they both emphasized how enjoyable styling your ugly-sweater can be, especially as they were doing it together. One of the best things about Christmas and the winter holidays is being cozy with those close to you. Skriver says that when setting up her table for her guests, she wanted it to have that “cozy” feeling that many hold so dear throughout the holiday season. Though this year as a whole has felt like anything but, Tookes says that when all of this is ready for the get-together, “it really feels like you’re in a fairy tale.” 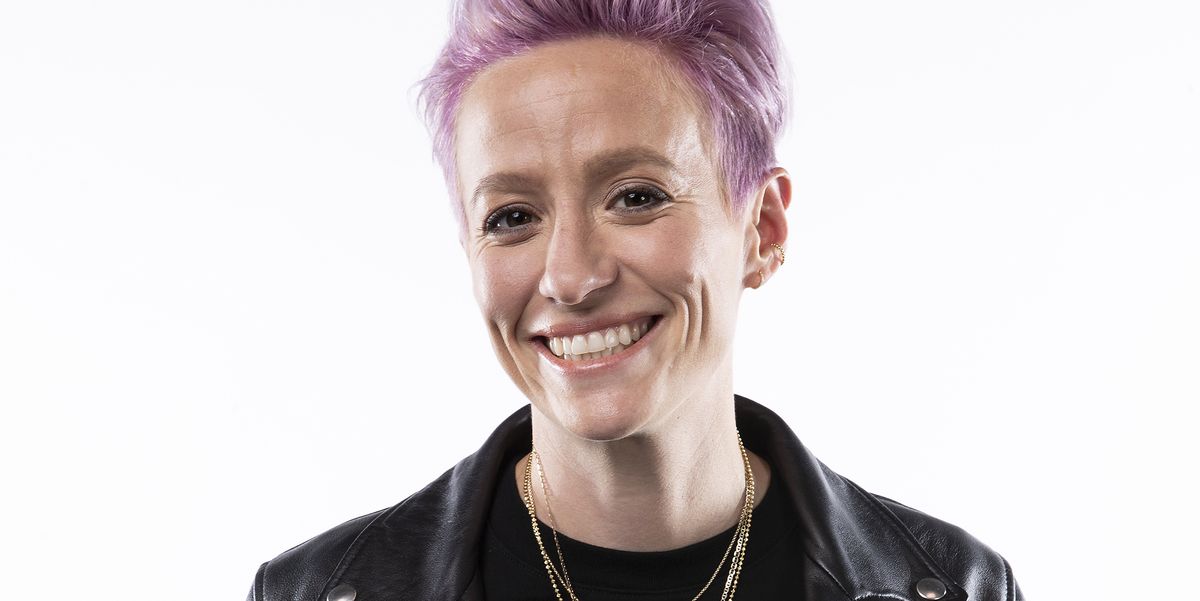 Megan Rapinoe Speaks Out About Coming Out

After coming out as gay, female soccer legend, Megan Rapinoe, talks about her own coming out process and believes her sexuality and honesty are something even bigger than herself.  Rapinoe says that she’s usually not the kind of person to say or do risky things, but believes that the declaration of her sexuality was ultimately crucial.

Megan represented the United States at the Olympics, where she spoke about her sexuality and coming out. Despite her uncertainty as to how thousands of people would react to the news, Rapinoe bravely told her truth and it went very well. She didn’t receive judgment, and felt no remorse. She felt a massive surge of positivity and consolation with the love from her team and fans. Not only did the bold Megan Rapinoe speak out for herself, but also for those who needed to hear a burst of inspiration. She enabled people to feel good about themselves and their sexuality, as she served as an LGBTQ+ role model for those in a similar situation. Rapinoe is not only an inspiration on the field, but also to many fans around the world who benefited from her story and positivity. 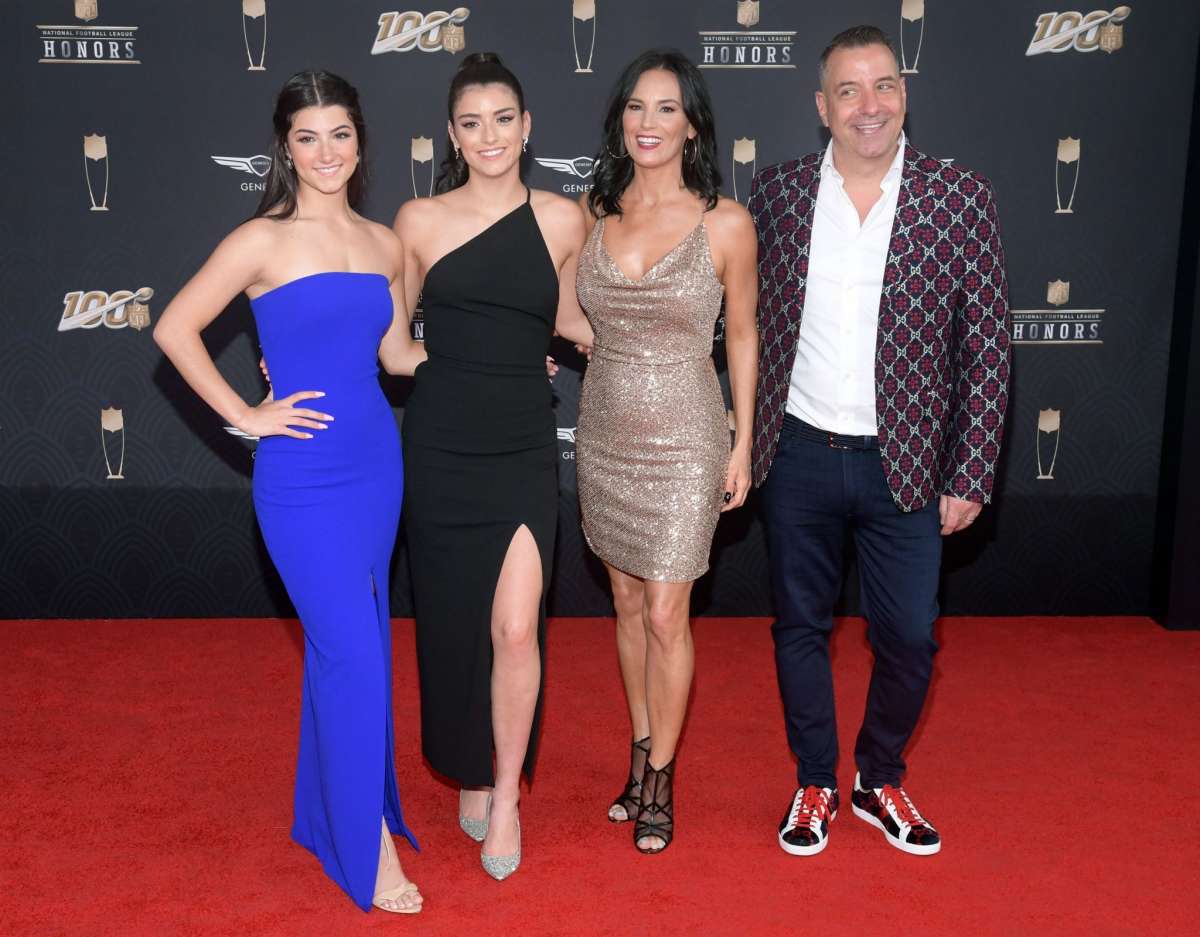 Heidi D’Amelio’s Not A Regular Mom, She’s A TikTok Mom

As the popular video app, TikTok, surged to its fame in around 2018, a few familiar faces began to commonly reappear and gain major fame, one of those being Connecticut teen, Charli D’Amelio. The teen is now known for much more than just her simple dancing videos, as she has her own drink named after her at Dunkin’ Donuts, and her family has become social media moguls. After her sister Dixie released a single, and her father constructs his own media company, the family has continued to grow their popularity as they begin to expand their talent off of TikTok.

The two D’Amelio Sisters attribute a large portion of their success to their mother, Heidi, who they see as an “unofficial momager”, who helps them with business deals and doles out classic, yet ever-so-helpful motherly advice. Heidi told Elle Magazine that she often worries about her girls and their rapid escalation of fame as well as revealing her parenting style and the hefty emotions that come along with their new life as celebrities.

Heidi actually classifies herself as a tough parent, as she says, “I remember Charli told me, ‘I want to be an ice skater.’ She was four. The next day, I signed her up for lessons. We were at the rink and she said, ‘Where’s my tutu?’ I’m like, ‘No, you have to wear snow pants and a helmet!’ She said, ‘I don’t want to do this.’ But I made her stick with it. I told her, ‘You’re going to do the rest of these four weeks.’ I was tough on them.”

Given that her daughters are two of the most popular social media stars, Heidi has made sure to maintain some boundaries with their online accounts, and even talks about their media access before fame. She says, “They still check with me [before posting to social media] all the time. They’re like, ‘Should I post this?’ Whether it’s Instagram or TikTok. I turn it back on them, like, ‘If you’re asking me this, what are your concerns?’ Marc would say, ‘Is that good for your brand?’ You are a brand in your own right, you are a human. This is what you stand for. This is what you’re about. So we wanted Charli and Dixie to think about whether what they were posting represented their brand.” Despite the fame that the two girls receive online, the D’Amelio parents still of course view them as their teen daughters, and oftentimes make them take down posts they view as inappropriate.

The D’Amelio’s empire continues to grow each and every day, as the family has ultimately announced their own reality TV show. Mrs. D’Amelio believes that this show will allow fans to gain true insight as to what the family is really like, and claims that, “”People think they know us and what we’re about, but they don’t.”

Though the pandemic has brought about drastic changes to society and daily life, essentially altering the human definition of normal, Heidi explains how the D’Amelio’s have adjusted to these trying times. She explains, “Charli and Dixie get their coffee and get their day rolling. Charli likes to do some skincare and brush her hair. Dixie shows up a little Dixie-ish; she doesn’t care. Then I [assess] their many, many emotions [based on] what happened after they woke up and checked their phones. I’m like, ‘All right, you’re going to be okay,’ kind of talking them through [the dramas of the day]. It’s always a roller coaster. You never know. They will wake up and either be in a great mood or not. It’s a lot of emotions [in our house], but they’re teenagers.”

Even with the fame that the family has received in the last few years, this interview with Heidi D’Amelio shows a much more raw side of the celebrities and shows that deep down, they’re just like us. 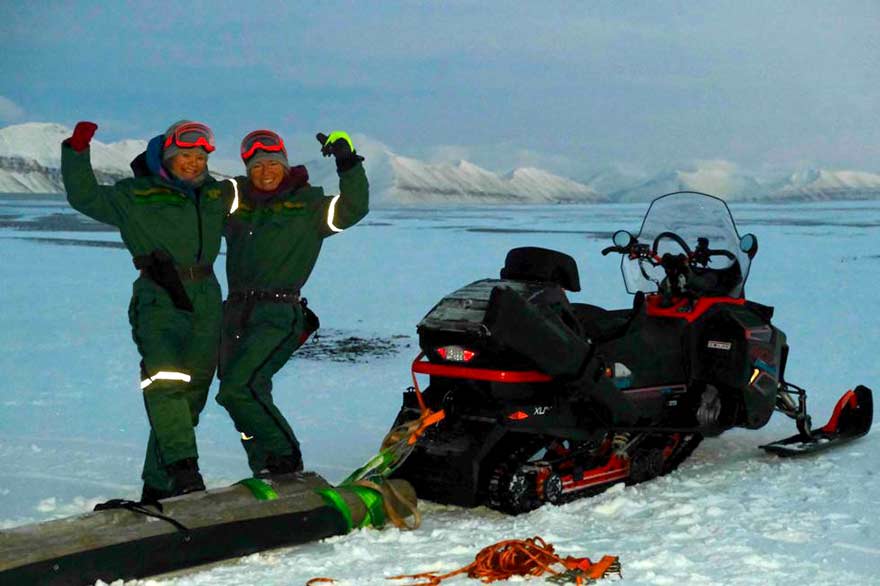 Enduring the Cold to Spread Awareness

Sunniva Sorby and Hilde Fålun Strøm are two women who are passionate about the climate and determined to make a difference. Beginning in September 2019, the two inspiring individuals have spent over 8,000 hours in a small cabin in the Norwegian Arctic without electricity or running water. Sorby and Strøm are both experienced polar explorers and have endured the harsh conditions of the cabin for several months. Sunniva and Hilde are isolated from society, surrounded only by polar bears, reindeers, and polar foxes. The explorers are the first all-women team to overwinter in the Atlantic. These brave explorers hope to educate people about the detrimental effects of climate change, even creating an online platform “Hearts in the Ice”, where they document their journey and spread awareness for their cause.

Sunniva Sorby and Hilde Fålun Strøm have been collecting data during their voyage to help the Norwegien Polar Institute and NASA. By sampling ice cores and monitoring wildlife, they are learning about the Arctic and spreading their knowledge to organizations and the public. They have also been learning about the wildlife around them and spreading this knowledge with children and other educators. When COVID hit, they were unable to return home as planned in May. They were forced to travel 87 miles to restock their supplies in July and were finally able to return home two months later. In October, the team returned to the cabin for another Arctic winter. They hope that their platform can help share ideas and knowledge about climate change and its effects on the earth. 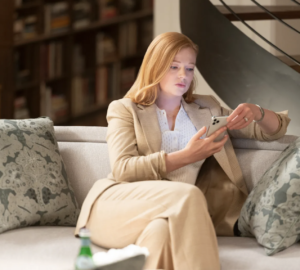 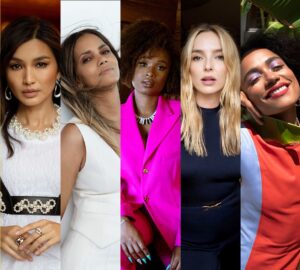