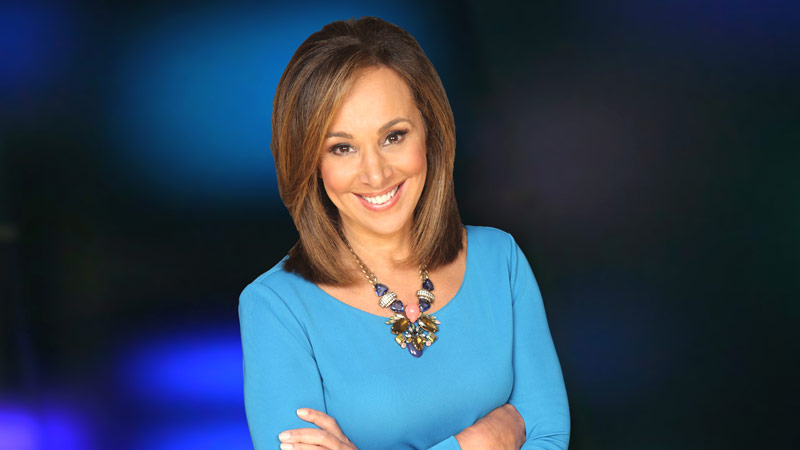 Rosanna’s notoriety has landed her a number of appearances in movies and TV shows. In 1997, Scotto made a cameo appearance as herself on an episode of the Fox police drama New York Undercover. She also appeared in the 1998 movie The Object of My Affection as a news anchor. Other brief roles in the films include, Lisa Picard Is Famous in 2000, Ransom in 1996, A Simple Favor in 2018, The Scout in 1994, the remake of Miracle on 34th Street in 1994 and Ghostbusters in 2016.

Rosanna says that got her first big news break in the early ‘90s when she received an exclusive video tape detailing Woody Allen’s alleged sexual assault on his and Mia Farrow’s daughter Dylan at the time of their child custody case. This news story recently made headlines again in connection with celebrities reconsidering and terminating their support of Woody Allen in light of the #MeToo movement.

Rosanna began her career in television at WTBS, Ted Turner‘s UHF television station in Atlanta, where she was a reporter for two local programs and an associate producer of the station’s evening newscast.

Born and raised in Brooklyn, Rosanna lives in the New York area with her husband and their two children. She is part owner of the family’s New York City restaurant, Fresco by Scotto which is also sometimes referred to as the “NBC commissary” due to the many entertainment industry people that regularly dine at the restaurant.

Chloe: You began your career in the early days of CNN in Atlanta and worked your way up in the TV world to get to where you are today. Can you tell us about your journey? Did you always want to be on-air? What do you think was the most valuable experience?

Rosanna: I always knew that I wanted to be a reporter. I went to Atlanta because CNN was just starting out and they were hiring kids right out of college. I started as a chyron operator, moved to researcher, field producer, and then reporter. It was a wonderful experience because I learned so much about every aspect of the business.
I had a very patient and nurturing reporter who taught me the business. I try to pay it back to the young kids who are following in my footsteps.


Chloe: You have said that in some ways it is harder for this generation to break into TV, however since there are so many other news formats today, there is a larger variety of opportunity. What would you say are the most important personality traits, qualities and skills necessary to make it in news media today? Is there any specific advice that you would give someone who wants to pursue a career in journalism?

Rosanna: When I started in the business there was a definite formula which we followed. Graduate college, move to a small market and make mistakes without repercussions. I did that and then moved to WABC where I took an entry level job and worked as a reporter on the weekends. That lead to a full time reporter job in my hometown.

While the formula has changed because some start now in cable or online platforms and don’t have to leave town, some things remain the same. Hard work! This job requires that you work weekends, nights and holidays.  Even now, after 30 years in the business, I treat my job as if I’m the new kid in the newsroom. I try to bring to the broadcast, stories and interviews no one else can get.

My advice to someone who wants a job in TV news is to make contacts and find angles to the stories that are unique and exclusive.

Chloe: You are so joyful and natural on camera, yet I read that you said it took you years to get comfortable “being yourself” on TV. What are some of the other difficult aspects of your job that people may not realize? On the other hand, what are the best parts about your job?

Rosanna: It took years for me to “be myself”. It takes practice and more practice to relax and show my personality sometimes while reporting on serious subjects.
I am grateful to have the opportunity to meet newsmakers and leaders in the entertainment world. While it looks like it’s just a conversation, there is a lot of research that goes into every guest. Some days we interview 10-12 people. I can spend a few hours the night before an interview just getting to know my interview subject. Then I listen to what they have to say and I react. If you are a curious person, this job is for you!


Chloe: You have said your first big break was in the early ‘90s when you received an exclusive tape detailing Woody Allen’s alleged sexual assault on his and Mia Farrow’s daughter Dylan at the time of their child custody case. It is extraordinary that this story still makes headlines today, first revisited in the #MeToo movement and belatedly impacting Woody Allen’s career. Can you discuss that breakthrough and how it affected your career personally? Having been in the eye of that storm, can you weigh in on the culture of the time and how society is perhaps treating the news differently now?

Rosanna: If the Woody and Mia case took place now, I believe that it would have been viewed differently. At the time, most of the public perception favored Woody. He painted Mia as a scorned woman. We were the only ones who questioned his relationship with his adopted daughter, Soon Yi. He would end up marrying her!
It was a tremendous amount of work covering this story. I had a story on the air every day for about a year. We received many tip and had to make sure they were credible. I received requests from TV and newspapers all around the world wanting to know the latest on the investigation. My boss didn’t want me to do any of them. He wanted to keep all the info for our news shows. Ratings were high. My bosses appreciated my hard work and soon after promoted me to anchor of the 10 o’clock news.


Chloe: In addition to your work on-air, you are also “President of Schmoozing” at your family’s restaurant Fresco By Scotto (I love that title by the way :)) and you attend events to connect with the NY community. Can you talk about your life outside of the studio and whether it is impactful on your career?

Rosanna: I am very involved in the community. I think it’s important to get and talk to people about what’s important to them. I emcee many charitable galas as part of my community involvement. I also think it helps people to get to know me and hopefully they will tune into Good Day NY.
In addition, my family and I own, Fresco by Scotto restaurant. I don’t work there because I have a day job! So when I do go to the restaurant, I just make friends, take pictures and sometimes book our famous clientele on my show. O! And I make sure that I taste the food.
Someone has to do it!