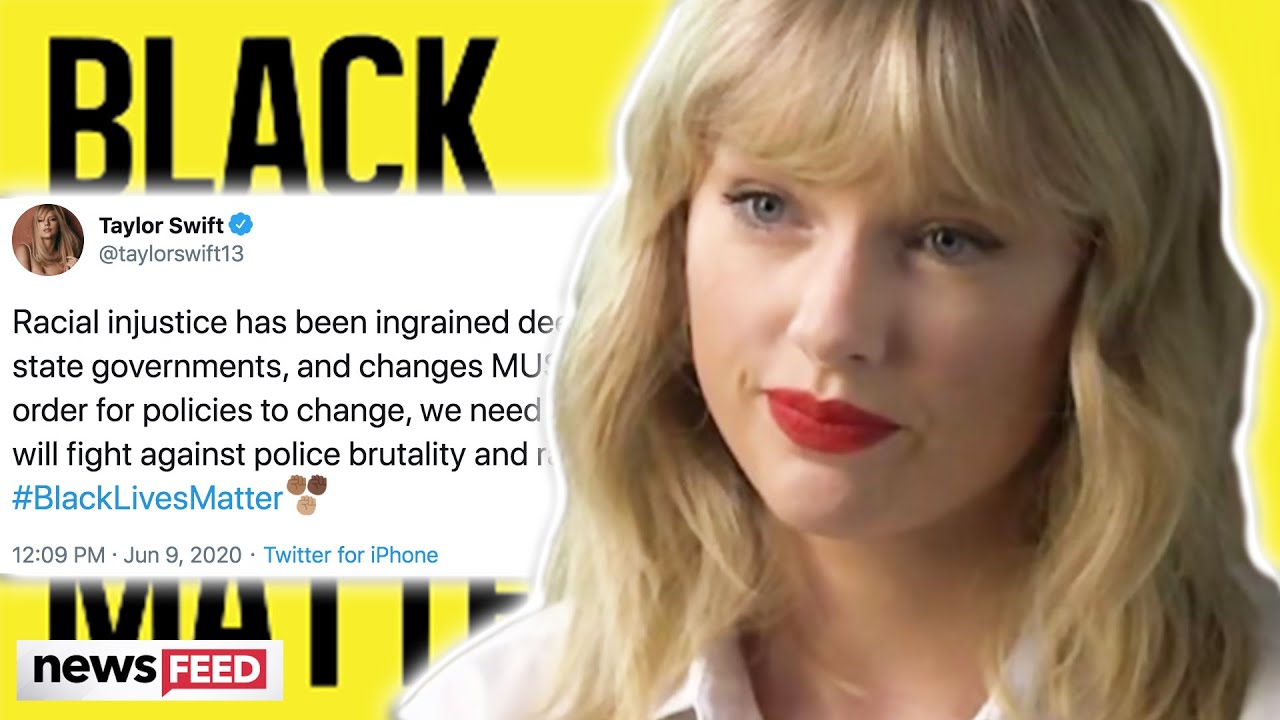 On May 29, Taylor Swift tweeted a direct response to president Donald Trump’s tweet regarding the protests in Minneapolis. Although Taylor has stayed somewhat politically quiet, aside from her endorsement of democratic candidates in a 2018 Tennessee ballot, she used passionate words on her platform to contradict Trump’s horrifying statements.

After protests against police brutality and centuries of anti-black racism and murder started up in Minneapolis, following the death of George Floyd, footage of the rioting surfaced. Trump provided his response to the protests via Twitter saying, “These THUGS are dishonoring the memory of George Floyd, and I won’t let that happen. Just spoke to governor Tim Walz and told him that the military is with him all the way. Any difficulty and we will assume control but, when the looting starts, the shooting starts. Thank you!” Trump was immediately called out for his direct reference to former Miami Police Chief Walter Headley, who first used the “when the looting starts, the shooting starts,” quote. When in power, Headley implemented very aggressive policies and has been remembered for his encouragement of police brutality in black neighborhoods. Headley developed a system of “war on crime” targeting “young Negro males, from 15 to 21.” Trump claimed to have been unaware of the history behind the phrase, proving further his lack of education on racial segregation history.

Twitter soon restricted Trump’s tweet so that it’s somewhat hidden and can’t be liked or commented on, because Twitter felt that his words were a major violation of the community guidelines regarding the glorifying of violence.

Taylor’s tweet included, “After stoking fires of white supremacy and racism your entire presidency, you have the nerve to feign moral superiority before threatening violence? ‘When the looting starts the shooting starts’??? We will vote you out in November.” When addressing the controversy of his tweet, Trump claimed he was just stating a “fact.” And later tweeted that, “Nobody should have any problem with this other than the haters, and those looking to cause trouble on social media.” 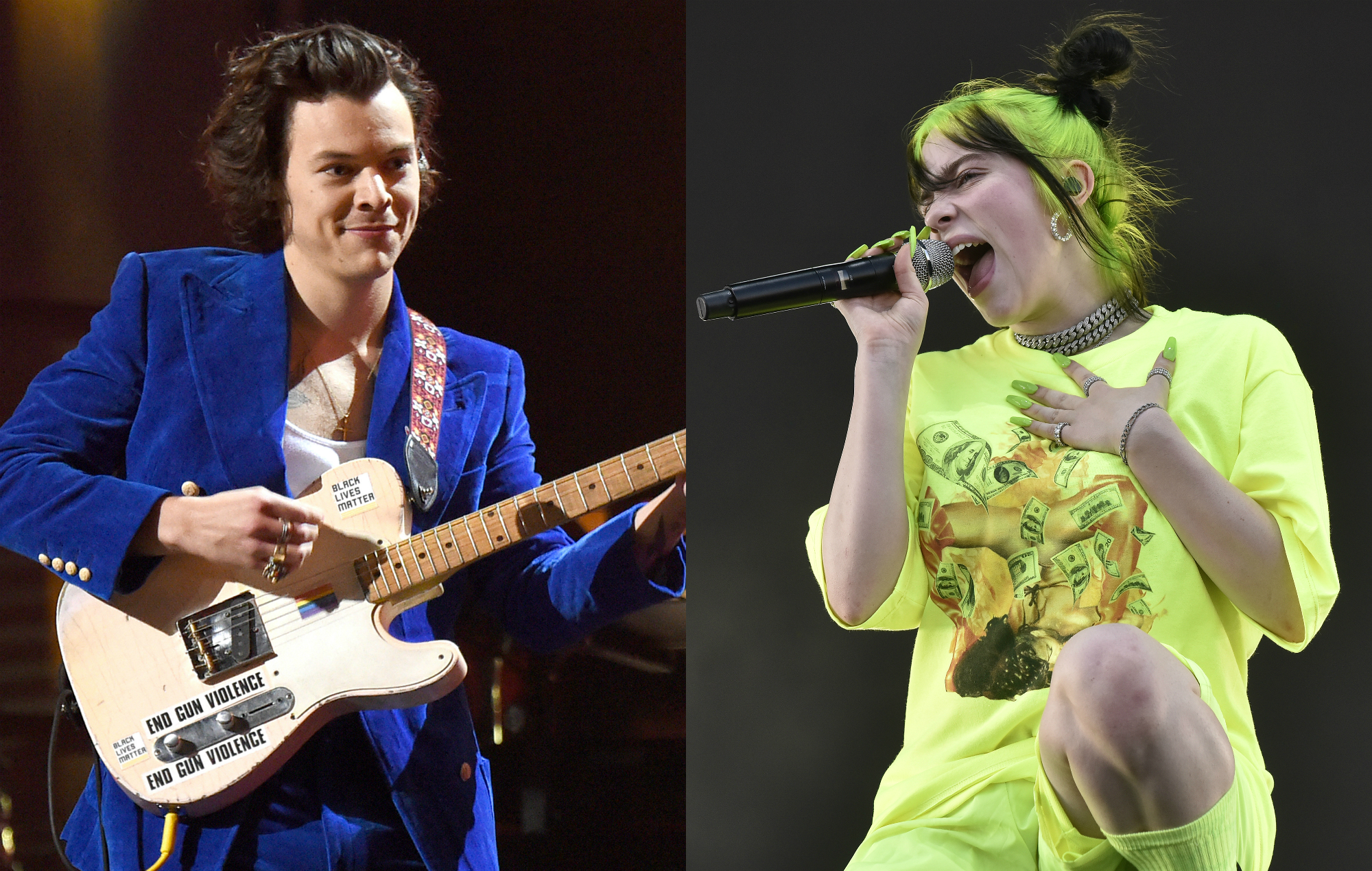 This past week in the USA has been filled with violence and rage as our country struggles to come to terms with the ongoing police brutality that disproportionately affects black women and men. Civilians all over the country have turned to the streets to demand justice for George Floyd, Sean Reed, Breonna Taylor, and so many others. Celebrities have big roles in creating change as they can use their social media platforms to advocate for change.

Harry Styles, who originally was bashed for not supporting the Black Lives Matter movement, shared a link to a petition on Twitter, and added that he would be donating money to sites that help protesters get bailed out of jail. Styles also added that “Being not racist is not enough, we must be anti racist,” he wrote. “Social change is enacted when society mobilizes.”

Shawn Mendes and Billie Eilish also spoke out and explained their reasoning for their delayed responses. Mendes adds that he’s “been trying to find the right words for days”. Meanwhile, Eilish says she’s “been trying to take this week to figure out a way to address this delicately” and later posted a passionate post on Instagram saying “I have an enormous platform and I try really hard to be respectful and take time to think through what I say and how I say it. But holy f**king sh*t, I’m just gonna start talking.” But time moves quickly. Not being prepared is a privilege.”

Ultimately, this week has shown us that standing up for what you believe in can really make a difference, and celebrities included can help create change and allow for the justice so many deserve. 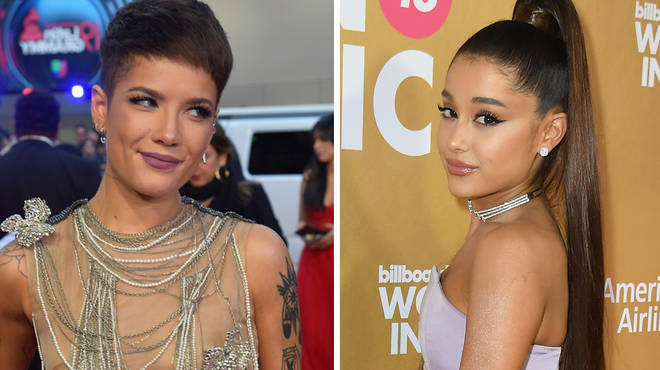 By Kate Kissell and Kiki Montgomery

Throughout these past weeks, many famous celebrities have chosen to use their platforms to speak out and bring attention to the protests following the death of George Floyd. Like Ariana Grande and Halsey, some celebrities have even chosen to join the protesters and raise awareness on the streets.

Halsey shared her experience with her followers on Instagram Live Saturday, May 30, and described how law officials processed to shoot “rubber bullets” at the crowd even though there had been no rupture of their line and cooperation from the side of the protestors. She explains this throughout her tweet, saying police “fired rubber bullets at us. we did not breach the line. Hands were up. unmoving. and they gassed and fired.”

Halsey continued tweeting, “Myself + many of my peers were shot, gassed + antagonized. The frontline was calm + did not provoke,” along with, “BUT MANY ARE NOT SAFE + MANY ARE IN CUSTODY.” After the protest, Halsey reassured her fans that she was safe, unlike the many other protesters that were hurt as a result of the law officials’ actions. She began to tell her fans that she was donating some of her money to bail funds to help other protestors who were arrested and urged her fans to do the same.

Similarly, celebrity Emily Ratajkowski shared her experience at a protest by uploading photos and updates to her social media. She tweeted about the event, and her displeasure about the harsh treatment protesters endured saying, “The media coverage of the #LosAngelesProtest is complete bullshit,” and, “The police are MILITARIZED, and civilians have no weapons. These are not violent protests, but they become violent when an actual ARMY is deployed. RIOTS ARE THE LANGUAGE OF THE UNHEARD.”

More Celebrities and influencers like Madison Beer, Ariana Grande,  Lauren Jauregui, Cody Fern, and Tinashe were also in attendance at protests. “THAT’S WHAT ‘USING YOUR PLATFORM’ TRULY MEANS,” a fan wrote on Twitter addressing the celebrities and their participation. “Ariana Grande is one of the biggest artists in the world. Not only did she use her platform to express her anger and pain towards what’s going on, but she also participated in the streets with the rest of the protesters.”, wrote another individual.

Other stars, choosing not to join protesters, have been doing their part by supporting the Black Lives matter movement through donations. E! News has suggested celebs like Chrissy Teigen and Janelle Monáe have been donating money to pay for protesters’ bail, and are encouraging others to do the same. As the #BLM movement continues, celebrities are using their platforms and following to educate and make a difference during this interesting time in our country’s history. 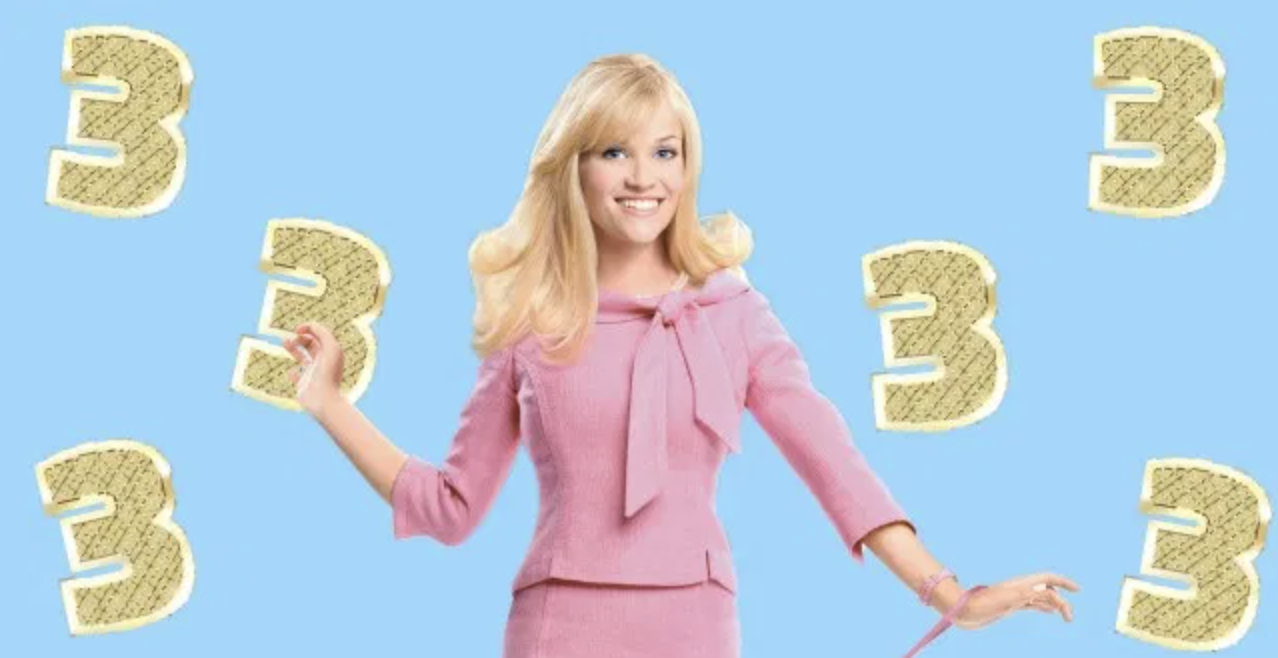 The rumors are true; Legally Blonde 3 is happening, and here is everything you need to know about the 3rd movie about one of the 2000’s favorites. In June 2018, Reese Witherspoon confirmed the film via Instagram in her ionic pink sparkly bikini with the caption, “It’s true… #LegallyBlonde3”. Since then, not a lot has been released about the movie, but we know this Mindy Kaling is writing the script. Deadline has reported that Kaling will team up with Brooklyn Nine-Nine creator Dan Goor to write Legally Blonde 3. Along with Kaling and Goor, the original producers are also coming back for the 3rd film. Reese has mentioned that, hopefully, many of our favorite actors and characters, like Jennifer Coolidge as “Paulette” and Luke Wilson as “Emmett,” will be coming back for the new film, but nothing has been confirmed yet.  When Witherspoon was asked to fill in the blank during an interview for The Hollywood Reporter: “Legally Blonde 3 will be…” She responded with this, “So much fun. So full of fashion. So full of awesome feminist ideas. It will be global. It will have animals. It will have returning cast members. We just need to film it first. But that’s my hope and dream for Legally Blonde 3.” Like Reese for now, dreaming will be the only thing we will have for Legally Blonde 3 as the pre-production for the movie has been shut down due to the coronavirus pandemic causing there to be no release date yet. Hopefully though, we will soon be “bending and snapping” with all our favorites and some new editions in the theater.

Alicia Keys, a fifteen time grammy winner and influential pop-artist, released a song advocating against systemic racism. Her new uplifting single “Perfect Ways To Die”, recalls the deaths of Trayvon Martin, Michael Brown, and Sandra Bland. Although the song was recorded over a year ago, it is still extremely relevant to today’s era. Keys notes that “collective rage has existed for a long time. I don’t know if it’s quite existed in the consciousness that has reached so many people at one time — that’s what feels new. What is going on is relentless, it’s just so obvious. The blatant injustice and racial inequity and systemic racism — it is so clear that I don’t think anybody can ignore it. I think that it’s where it’s coming from in this collective way. All of it is built into the fabric of existence and we’re all just completely finished with it.”

Keys also feels especially empowered to help Breonna Taylor, an innocent black woman who was murdered in her sleep by the Louisiana police department. Keys notes that she “spoke to the family [of Breonna Taylor] as a group, which was very powerful. We spoke to her sister, her mother and their lawyer, and we were able to get a sense of where everything was. As a mother, feeling like you’re yelling and screaming for months, and nobody is paying attention, and nobody is giving it the validity and seriousness it deserves… The family felt acknowledged. The timing was essential because Louisville was voting on banning the no-knock warrants. The no-knock warrants were banned and voted against, and it was a unanimous vote. That happened literally two days after the coming together of all these women, and all of us all over the world pushing for that. That felt positive for there to be movement.”

Alicia Keys has been able to use music as a platform to advocate for social justice and change. With the song itself, Keys notes that she wishes the song “ didn’t have to exist. It was written in reflection of [the deaths of] Michael Brown and Sandra Bland and it was written a little while ago, but right now is the time to share it. I keep saying, ‘I really hope there’s a time we won’t need to share it,’ but it keeps remaining relevant. This is a musical expression of what we’re seeing every day, this police brutality that is completely out of hand. The amazing thing about music is that it continues to connect us no matter what. I am moved that music remains this powerful tool to connect us and [help us] talk about what we’re seeing.” 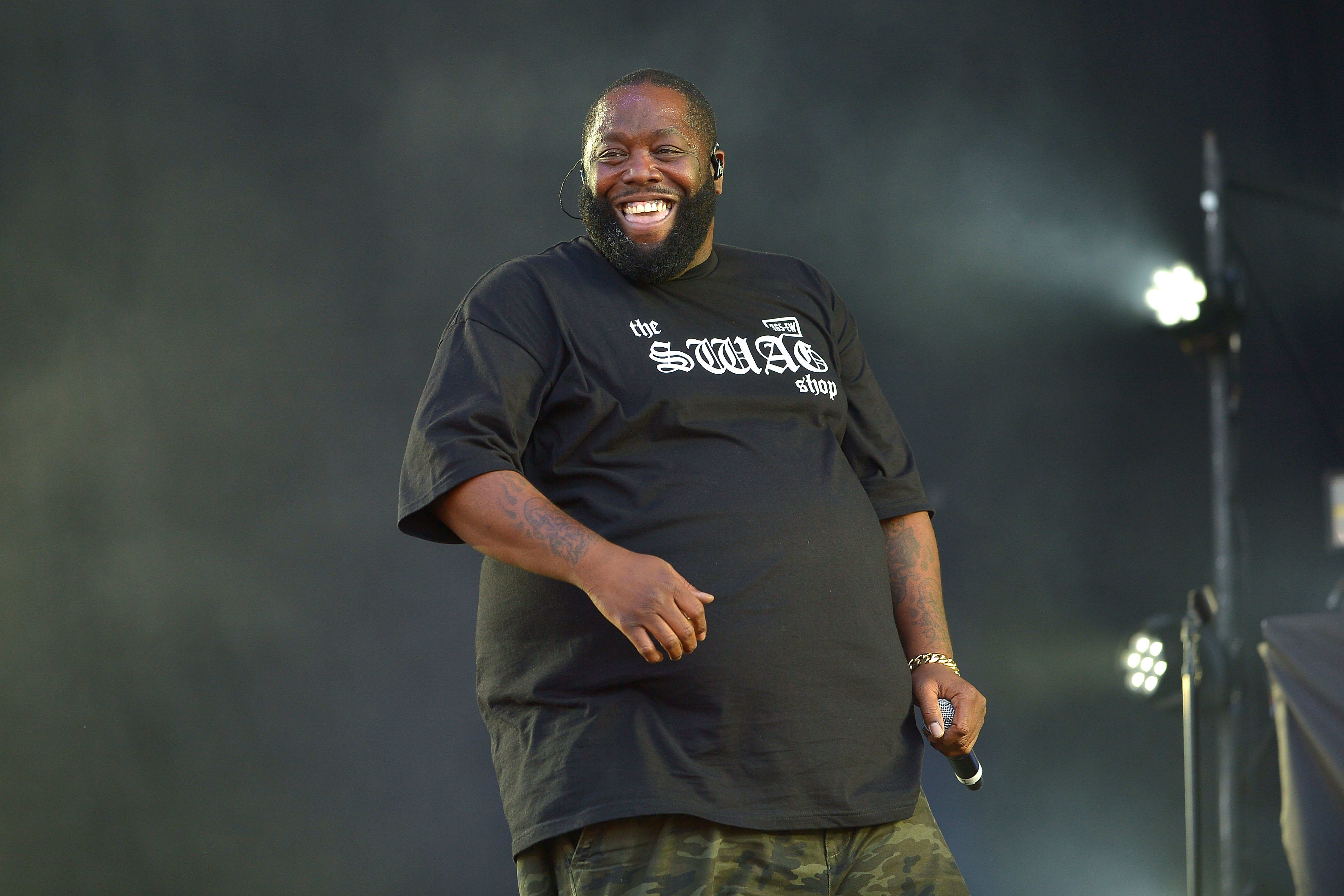 Killer Mike gave an amazing speech to the people of Atlanta

Killer Mike, the son of an Atlanta city police officer, gives an empowering speech telling Atlanta protesters not to burn their houses down in anger of the ongoing police brutality and systemic racism embedded in our country. Mike notes “it is your duty not to burn your own house down for anger with an enemy. It is your duty to fortify your own house, so that you may be a house of refuge in times of organization. I’m mad as hell. I woke up wanting to see the world burn down. I’m tired of seeing black men die. He casually put his knee on a human being’s neck for nine minutes as he died like a zebra in the clutch of a lion’s jaw, and we watch it like murder porn, over and over again. That’s why children are burning things to the ground — they don’t know what else to do.”

Mike’s speech can be used as a reminder that combating violence with violence is never the answer. We must take to the streets, we must make change, we must achieve justice for those who deserve it, but we CANNOT lose more lives in the process.