Nancy Pelosi As Speaker Of The House 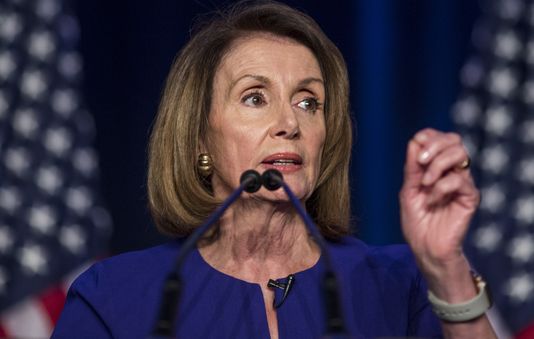 Will Nancy Pelosi Reclaim Her Spot As Speaker of the House?

The midterms are over and the Democrats have taken back the majority in the House of Representatives. Nancy Pelosi, who made history in 2007 by becoming the first and only woman to ever serve as Speaker of the House (from 2007 to 2011), will likely reclaim the Speaker position when the new house reconvenes. Lately she has proven her masterful negotiating skills and has promised to mentor the next generation of Democrats. Her heated exchange with Trump over the border wall in the Oval office solidified her power profile, and her chic, burnt orange colored coat that she wore leaving that televised meeting not only dispelled any “old school” image but has spawned endless memes, hashtags and even the twitter handle @NancyCoat. Max Mara, the brand behind the coat has since announced they will reissue the style due to all the hype, likening Pelosi to a British Royal with fashion influence!

Previously as Speaker, Pelosi was instrumental in passing numerous high profile bills including the Affordable Care Act and the Dodd-Frank Wall Street Reform and Consumer Protection Act, two bills that the Trump Administration has attacked.  Pelosi was also behind the American Recovery and Reinvestment Act and the 2010 Tax Relief Act which helped stimulate the economy after the 2008 Recession.

While Pelosi was credited with helping secure Democratic success at the midterms, some new progressive Democratic members are protesting her hold on the leadership of the party.  Pelosi had an unlikely supporter for her return as Speaker in President Trump the day after the midterm elections, with him tweeting, “In all fairness, Nancy Pelosi deserves to be chosen Speaker of the House by Democrats. If they give her a hard time, perhaps we will add some Republican votes. She has earned this great honor!”

Pelosi is the highest-ranking female politician in the history of the United States government. That status comes with a lot of controversy and Pelosi is well aware of her detractors. However, she is also confident about her accomplishments, her friendships and what she brings to the table, not least of which is the reported $593.8 million she has raised for Democrats since joining House leadership in 2002, according to her campaign spokesman Jorge Aguilar. While people may crave change, it seems that Pelosi’s experience, determination, and successful negotiating skills will be leading the House again in 2019.