Miuccia Prada and Other Women Leading the Fashion Industry To Sustainability

Earlier this year, a report suggested that the fashion industry’s carbon footprint is larger than the airline industry’s. As a result, the fashion world has undergone some introspection and is recognizing their significant role in the climate crisis. With cries getting louder for the fashion industry to reduce its environmental impact, many women in the industry, beginning before and after this report came out, have taken the lead on making their brands sustainable or focused on reusing and recycling clothing.

In June, Miuccia Prada, Prada’s head-designer and founder, launched a pioneering project, Re-Nylon, for Prada’s classic nylon bags. Re-Nylon is a sustainable line of iconic Prada bag silhouettes made in a unique regenerated nylon called ECONYL instead of virgin plastic. Simultaneously, Prada announced its intention to replace all new nylon in its collections with ECONYL nylon by 2021. As Prada explained in a press release, textile company Aquafil is able to turn plastic waste from oceans, fishing nets, landfills, and textile fiber waste into ECONYL, a fiber that can be recycled indefinitely. ECONYL will be used to make every item in the collection, which includes: belt bags, shoulder bags, tote bags, duffels, and backpacks, and the items will look identical to their original virgin nylon counterparts; however, they will feature Prada Re-Nylon logos. The Prada Re-Nylon logos were designed by OMA/AMO in one of five colors, which are “representing the five continents.” Well, at least Miuccia Prada’s sustainability skills are better than her geography skills 😉 (Ummm, there are seven continents Miuccia!)

The RealReal founder Julie Wainwright created the biggest online marketplace for authenticated consigned luxury goods and simultaneously made buying vintage designer clothing more acceptable. Since The RealReal’s establishment in 2011, the stigma associated with buying pre-owned clothes and accessories has vanished. On the RealReal, consignors can sell their designer items online for a reduced version of the retail price. The RealReal had $207 million in revenue last year and is said to be benefitting from a growing acceptance of buying pre-owned luxury goods online. It is also extremely appealing to younger consumers, who feel a little more responsible about needless waste.

Reformation Clothing Founder Yael Aflalo launched her sustainable direct-to-consumer fashion site and fleet of boutiques in 2013. Since the beginning, Aflalo has advertized Reformation as an eco-friendly brand, which resonates with the younger generation shoppers. Reformation states that they put sustainability at the center of everything they do in order to have the biggest impact. Also instead of reporting quarterly earnings like other large corporations, Reformation publishes sustainability reports on their website, including how much water and carbon that they’ve saved and the number of pounds of clothing scraps they’ve up-cycled.

Then there is Jennifer Hyman’s genius concept Rent the Runway which allows women to rent their clothes instead of buying them, reducing the amount of waste. One of their sales promotions is “SMALLER CLOTHING FOOTPRINT – Clothes end up in the back of closets or landfills. Power the sharing economy and rent instead.”

With the world’s rising awareness around climate change, these leaders in the fashion world are adapting to the new reality and recognizing that sustainability is increasingly becoming a selling point to a more mindful consumer. 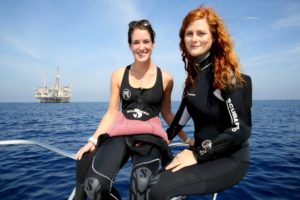 All across the world, people are worsening a plethora of destructive environmental issues each day. The effect that humanity is having on the environment is becoming ever-more important. Since women in many parts of the world hold traditional roles as primary caregivers and as the main providers of food, women are more impacted by the causes of global warming. In fact, the U.N. estimates that 80 percent of those afflicted by climate change are women. Therefore, women have become leaders in the conservation field and climate action movement through their powerful roles in business, science, education, activism, and so much more.

After acknowledging the frightening realities of global warming, the United Nations recent IPCC reports and Paris Agreement specifically demanded a global increase in empowering women in climate decision making. Now, women across the globe are speaking up and taking leadership in the fight for action for the sustainability of our planet. For example, earning a spot on Forbes’s thirty under thirty list in 2018, Amber Jackson and Emily Hazelwood started a women-owned marine environmental consulting firm. Named Blue Latitude, their firm develops sustainable and cost-effective solutions for the environmental issues that surround the offshore energy industry. As marine scientists, entreponers, and activists, Jackson and Hazelwood are embodying the term girl boss. Another woman who earned a spot on the Forbes’s thirty under thirty list in 2019 is Daniela V. Fernandez, Founder of Sustainable Ocean Alliance. In just five years, Fernandez has transformed the SOA from a college idea into the world’s largest alliance of ocean leaders and entrepreneurs to protect the ocean and support ocean start ups, with members taking action in over 140 countries.

Thanks to thousands of other incredible women like these three, our planet having a sustainable future may become possible.