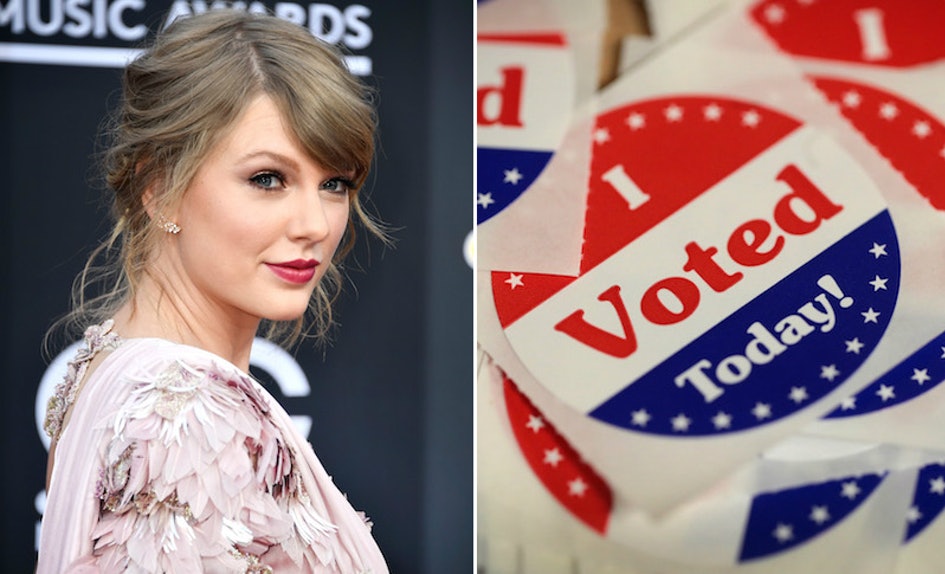 Known for dominating the music industry with her award winning music, Taylor Swift has found herself breaking a different kind of record these days. Swift has always been seen as a young female pop artist role model. After receiving 23 awards out of 29 nominations Swift became the most awarded female artist in AMA history. Many people believe that Swift won her awards for not only being the most relatable pop-song artist but for her generosity and her outlook on life that makes her such an amazing role model for both young girls and older teenagers. After being a victim of bullying Swift has started multiple anti-bullying charities and has been a huge contributor to MusiCares.

Recently Swift has decided to use her platform to talk politics, with numerous posts on social media about the upcoming election. And in typical Taylor fashion, it had a significant impact. After her first political Instagram post, Vote.org reported that there was an extraordinary increase in voting registrations. Kamari Guthrie, director of communications for the nonprofit said, “We are up to 65,000 registrations in a single 24-hour period since T. Swift’s post.”

Swift announced her decision to publicly join the political discussion, explaining that while she had avoided sharing her views in the past, “due to several events in my life and in the world in the past two years, I feel very differently about that now.”  She continued, “I always have and always will cast my vote based on which candidate will protect and fight for the human rights I believe we all deserve in this country,” Swift said. “I believe in the fight for LGBTQ rights, and that any form of discrimination based on sexual orientation or gender is WRONG.”

Of course there was backlash towards the singer, including President Trump who stated that he liked Swift’s music “about 25% less” after she endorsed a Democrat for Tennessee.  But Swift chose to ignore her “haters” and believes that the only way to make the country better is to speak out for what is right for your fellow citizens. Swift states, “so many intelligent, thoughtful, self-possessed people have turned 18 in the past two years and now they have the right and privilege to make their vote count.” Taylor believes that due to the intense hate in the world that we live in, every person should vote if they have the opportunity to. Taylor Swift is not only seen as a role model to young women she is seen as a role model to the whole entire world.

Mid-term Results: A Record Number of Women Are Now In Congress

The results are in and the record-setting number of female candidates that ran for office (more than 250) this year has resulted in a record number of women serving in Congress.  There were 95 female wins in the House of Representatives and 13 female wins for the Senate. According to NPR, that means that there will be a total of 118 women in Congress, now making up about 22% of the Congress as opposed to previously 107 women at 20%.

There are also a number of firsts for women from the mid-term elections:

Kansas’s Sharice Davids and New Mexico’s Deb Haaland became the first Native American women to serve in Congress.Yvette Herrell, of New Mexico is also a Native American who may be elected to Congress, however as of press time, that election was too close to call.

Alexandria Ocasio-Cortez, at 29 years old, became the youngest woman elected to Congress. Ocasio-Cortez beat out another New Yorker for that achievement, Representative Elise Stefanik who was 30 at her election in 2014.

Abby Finkenauer and Cindy Axne are the first women to be elected to the House from Iowa.  Iowa also nominated their first woman governor, Kim Reynolds.

Maine will have their first woman as governor, Democrat Janet Mills.

Kristi Noem will be the first woman governor for South Dakota.

Additionally, there was a huge increase in voter turnout for this election cycle which indicates that the entire population is increasing their engagement in politics.  Congratulations to all of the new candidates. 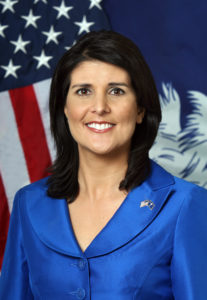 Nikki Haley: Looking Back on Her Accomplishments Ahead of her Resignation

Nikki Haley announced in early October she will be resigning from her post as the Ambassador to the United Nations at the end of the year. This announcement came as a shock to many since Haley has only been in the position since late January 2017, but at the same time it could be seen as somewhat expected since before being appointed, Haley was critical of her appointer.

The United States Ambassador to the United Nations is a position appointed by the President. After the individual is confirmed by the Senate, there is no set term limit, serving however long they or the President want. Responsibilities of the job include representing the United States at UN meetings and subsequently serving as a spokesperson for how America stands on the issues discussed.

Although Haley will only have served in her position for a little under two years, she still managed to get a fair amount of work done such as saying she would punish countries that didn’t support moving the US Embassy in Israel to Jerusalem, put sanctions on North Korea in hopes they would give up their nuclear program, and advocated for the victims of the crimes Syria and Russia committed against their own citizens.

What’s next for Nikki Haley? Although it is mostly unknown, some are speculating she will make a run for President in 2020, which doesn’t sound too out of the realm of possibility considering prior to being Ambassador she was the Governor of South Carolina from 2011-2017 and a member of the South Carolina House of Representatives from 2005-2011.

As of press time it is unclear who will be replacing Haley, but NPR is speculating that financial executive and philanthropist Dina Powell might be on top of the short list for the job. One thing is clear: whoever fills Haley’s position is going to have some pretty big shoes to fill.

Ways To Give Back On Thanksgiving